350th Anniversary of the Fondation of Montreal 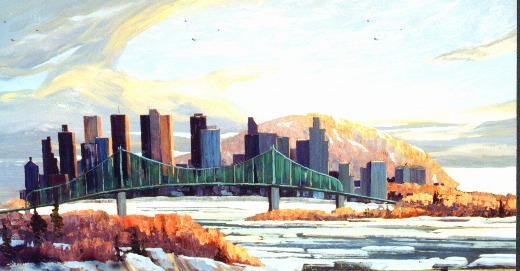 In 1992, it was the 350th anniversary of the foundation of the city of Montreal. To celebrate the occasion, a collaboration between Stanké, Beauchamp and Savoie led to the publication of an album containing the silk-screen prints of twelve Quebec painters and the texts of twelve Quebec writers. The album came with a book entitled "Montréal en mots Montréal en couleurs". Vladimir Horik was one of the twenty-four artists who took part in the project. Here is the text that accompanied the painting created for the occasion :

"In order to depict the external world, draw from one’s internal world.
Capture the emotion by concentrating on the framing.
The art of Vladimir Horik, born in Edmonton in 1939, honour mostly the landscapes of Charlevoix,
where he has been living since 1971.
Preferring nature, forests and wild life to the feverish and clocked pace of big cities,
every visit to Montreal is a shock".