In October 1993, as a logical sequence to the exhibitions held in Annecy in December 1992 and in Saint-Paul-de-Vence in June/July 1993, Vladimir Horik had an exhibition at the CNIT World Trade Center at La Défense in Paris, in collaboration with Le Fouquet’s and Oléodyne, an international French company. 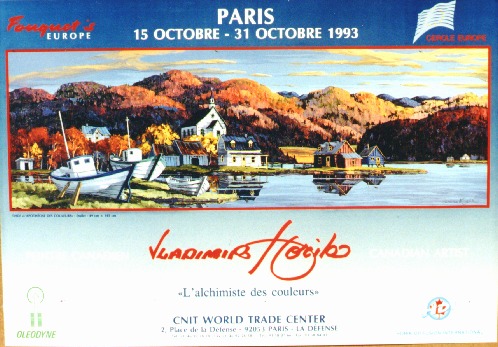 An exhibition in Paris is always a special event and this one was no exception to the rule. It was held in a magnificent setting and the response from the public was beyond all expectations. In addition to the most recent works of the artist, the visitors could admire the private collection of a major Parisian art collector who had kindly accepted to share it with them.

"The exhibition’s preview started with the presentation of a video film on the artist and his environment. It was followed by a Quebec flavoured gourmet feast, prepared under the supervision of a famous chef who was especially invited from Quebec for the occasion, and enjoyed by some 250 guests. The one-man show was seen, not only by the art lovers and the general public of the region, but also by invited clients who came from several neighbouring countries. Throughout the two-week exhibition, the artist created a large painting on-site, whose different stages of production were followed with great interest by a good number of people". Taken from L’alchimiste des couleurs VLADIMIR HORIK The Alchemist of Colours. 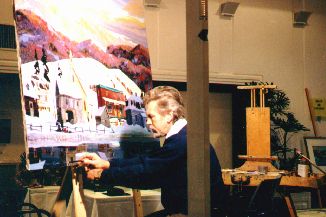 The 1996 event, equally held in Annecy, differed somewhat from the one in 1992. First, a gourmet brunch featuring Quebec produce and dishes was prepared by chefs from Quebec and served the day after the opening. Then, the new bilingual monograph, entitled "L'Alchimiste des couleurs VLADIMIR HORIK The Alchemist of Colours" was officially launched in Europe during the exhibition. 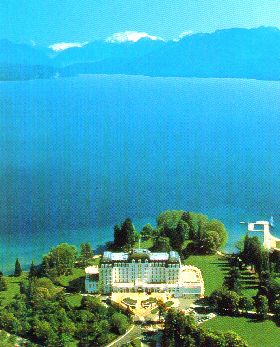